An 80-year-old man was killed last night (Thursday) in a fatal car accident on Histadrut Boulevard in Kiryat Haim. Medics and paramedics from Med"A. who were called to the scene were forced to determine his death. Examiners of the Traffic Division of the Israel Police are investigating the circumstances of the accident.

Haim Spielberg, a ZAKA volunteer who treated the scene: “This is an 80-year-old pedestrian who was hit by a vehicle. When we arrived, we saw the pedestrian lying on the road unconscious and suffering from a multi-system injury. Passers-by said that the elderly man was apparently using a treadmill and was hit by a vehicle while crossing a crosswalk, unfortunately the injury was severe and fatal and an MDA paramedic had to confirm his death on the spot. An extended team of ZAKA North volunteers took care of the dead and collected the finds in the difficult arena." 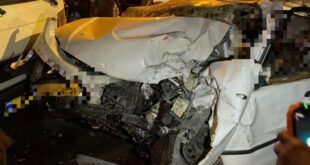