Weather forecast: local rains in different parts of the country, risk of flooding in southern streams

Today (Friday) will be partly cloudy in most parts of the country. Moderate southeasterly winds will blow and temperatures are not expected to change. The sea will be wavy and the height of the waves will be between 70-140 cm"M. The water temperature will be 19 degrees.

Prospect for the following days: Friday Partly cloudy. From the afternoon, local rain will begin in various parts of the country. Danger of flooding in southern and eastern streams. Temperatures have dropped. On a similar Saturday and on Sundays and Mondays no change is expected. This is what the forecaster Boaz Dayan said. 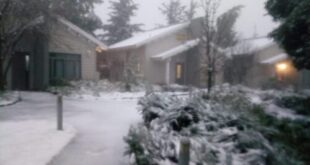 White morning in the Golan Heights: Snow possible in Jerusalem, fear of floods in the Judean Desert, the Jordan Valley and the Dead Sea Weather forecast: colder than usual, at night thunderstorms in the north and center

Weather forecast: Rainy and cold in most parts of the country, snow on Mount Hermon

15 s"From snow piled up on the upper level of Mount Hermon, the site is expected to open on Monday